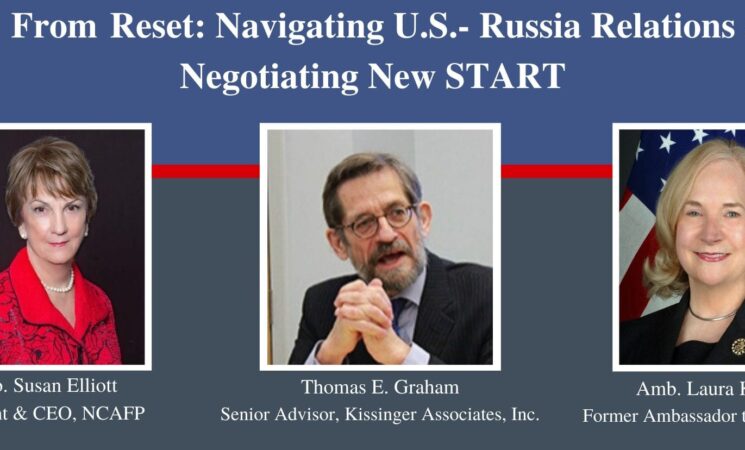 On May 6 the National Committee hosted the virtual public event Far From Reset: Navigating U.S.- Russia Relations and Negotiating New START.  Featuring Dr. Thomas E. Graham and Ambassador (ret.) Laura M. Kennedy, the conversation explored a number of different areas in the U.S.-Russia relationship, including whether to extend the New START treaty, originally signed in 2010 under Presidents Barack Obama and Dmitry Medvedev.  Following the U.S. withdrawal from the INF Treaty last year, there has been much speculation on New START's future, and what it will mean for the U.S.-Russia relationship.

The conversation, moderated by NCAFP President Susan M. Elliott, can be watched, in full, below:

Thomas E. Graham is a distinguished fellow at the Council on Foreign Relations. He is also currently a senior advisor at Kissinger Associates, Inc., where he focuses on Russian and Eurasian affairs. He is a cofounder of the Russian, East European, and Eurasian studies program at Yale University and sits on its faculty steering committee. Graham was special assistant to the president and senior director for Russia on the National Security Council staff from 2004 to 2007, during which he managed a White House-Kremlin strategic dialogue. He was director for Russian affairs on the staff from 2002 to 2004.

Ambassador Laura Kennedy is a foreign affairs expert who served for nearly 40 years with the U.S. Foreign Service. She was Ambassador to Turkmenistan (2001-3), Deputy Assistant Secretary of State for European and Eurasian Affairs (2004-5), taught and served as Deputy Commandant at the National War College (2007-9), and was appointed U.S. Permanent Representative to the Conference on Disarmament in Geneva and Special Representative for Biological Weapons Convention Issues (2010-13). After retiring, she was recalled to active service in May 2014 to serve as Chargé d’Affaires at the U.S. Embassy in Turkmenistan until September 2014 and then as Charge at the U. S. Mission to the United Nations in Vienna and a member of the Board of Governors of the International Atomic Energy Agency until July 2015. Amb. Kennedy is an elected member of the American Academy of Diplomacy and serves on the Boards of the State Department’s Senior Seminar Association and the World Affairs Council of DC.