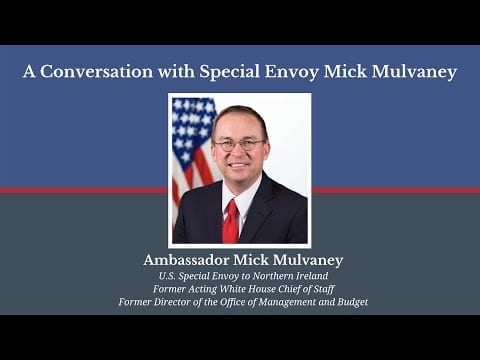 Recently, the National Committee on American Foreign Policy joined with Yale University’s Program on Peace and Development to host US Special Envoy for Northern Ireland, Mick Mulvaney for an on-record conversation about his recent trip to Dublin, London and Belfast. He noted the importance of face-to-face diplomacy and the need for continued dialogue. Special Envoy Mulvaney has also held the roles of Acting White House Chief of Staff and Director of the Office of Management and Budget.

Key points raised included concerns about an “accidental border” developing, though he remains convinced that all parties are on the same page to prevent that from happening and that a deal is near at hand; he noted a productive relationship with the US congress and mutual desire to protect the GFA, but pushed back on the notion that it has already been damaged by the Internal Market Bill; he suggested that the EU is the actor to watch regarding the imposition of a hard border because EU policymakers lack the shared and lived history between the UK, Northern Ireland the Republic; and he offered that seemingly unilateral decisions coming out of the home office should be understood more as missteps and bad politics, rather than intentionally inflammatory choices.

Special Envoy Mulvaney explained that many legacy issues of great concern have simply been sidelined by COVID in the current environment, though relations within Stormont and the devolved government are measurably better today than on January 1. Vitally, Mulvaney offered that many ongoing concerns, especially legacy issues, should be addressed in the short term. As a mythology of the Troubles begins to replace living memory, it will only become harder to find resolutions and closure.