Watch Now: The Legacy of Gorbachev

Home Past Events Archive Watch Now: The Legacy of Gorbachev 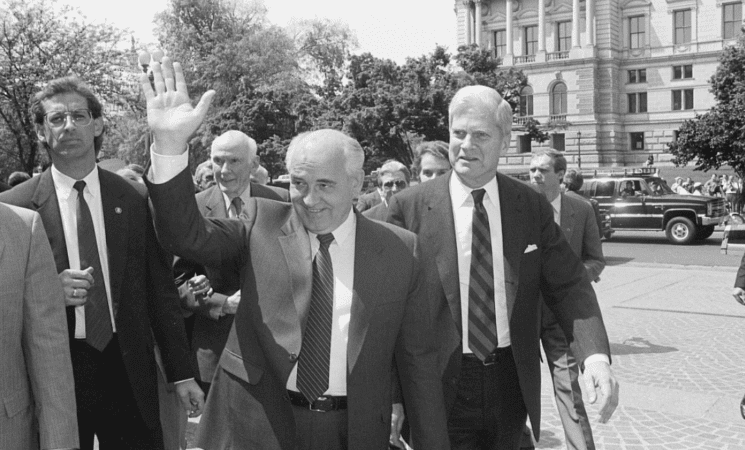 The Legacy of Gorbachev:
Russia's Foreign Policy Past & Future Trajectories

Meeting to be held virtually via Zoom

Dr. Raymond Smith
Author of "Negotiating with the Soviets, The Craft of Political Analysis"

Mikhail Sergeyevich Gorbachev was the last serving leader of the Soviet Union. His tenure (1985-1991) is notable for thawing relations with the West and marking the end of the Cold War. He was acclaimed for exercising military restraint when communist regimes split across the Eastern Bloc, granted more domestic freedom of the press and international movement, and was awarded the Nobel Peace Prize in 1990 for the fall of the Berlin Wall, which led to dissolve the Iron Curtain.

Mr. Gorbachev’s great reform projects called “glasnost” (openness) and “perestroika” (change) promised more transparency, modification of the state-control economy, as well as restructuring of the Soviet systems by allowing multi-candidate elections. Like many transitional leaders, he was caught between the criticisms from communist hardliners who considered his reforms too liberal, and liberals arguing that change was not happening fast enough. Despite such enterprises, how did Gorbachev’s efforts backfire? After a tempted coup by nationalists and his house arrest on August 19, 1991, Gorbachev resigned as General Secretary, de facto leader, on December 25 that year; hence, signifying an unintentional collapse of the Soviet Union.

How should the U.S. and the West remember Mikhail Gorbachev as a statesman? How should we discern his accomplishments from the tribulations? What conditions in the Soviet Union led to this transitional period? And, what unique lessons can the U.S. and Russia learn from Gorbachev’s legacy? Helping us to analyze the political life and legacy of Mikhail Gorbachev are Ambassador Paula Dobriansky and Ambassador Jack Matlock. Moderating this conversation is Thomas E. Graham, Distinguished Senior Fellow from the Council on Foreign Relations.

This event is open to NCAFP Members and the public.