Spotlight on Iran: What’s Next for the Movement and the Regime?

Home Middle East Spotlight on Iran: What’s Next for the Movement and the Regime? 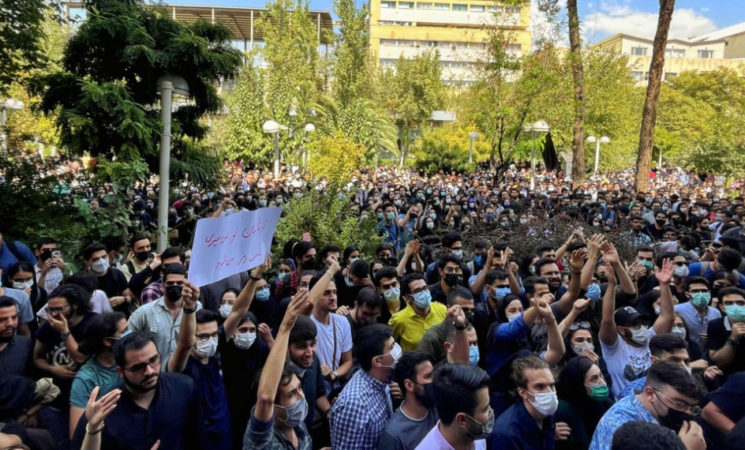 Spotlight on Iran: What’s Next for the Movement and the Regime?

The death of Mahsa Amini, a 22-year-old Iranian-Kurdish woman who died while in the custody of the  morality police last September, ignited protests throughout Iran. Since then, videos and images have emerged of large youth-led protests on the streets of Tehran and other provinces conducting acts of civil disobedience such as removing headscarves and chanting “death to dictator.” Male counterparts have equally participated in the movement signifying much wider support for the regime to relax its mandates. Work stoppages from teachers, drivers, and shop owners in the bazaars looked to be the cusp of an approaching general strike, conceivably adding more ground swell for political and social reforms.

Today the protests continue but in smaller numbers and more directed towards the ongoing mock trials and public executions, which the regime remains adamant about staging. With Iran becoming more economically and politically isolated, can the regime survive domestically and regionally?  Although largely leaderless and youth-led, why did Mahsa Amini’s death spark enormous political and social resistance toward Ali Khamenei? What are the long and short term objectives of the Iranian Gen Z-ers: reform or regime change? Will this help or further diminish Western relations with Iran?

Dr. Firoozeh Kashani-Sabet is a Walter H. Annenberg Professor of History at the University of Pennsylvania of Iranian and Middle Eastern history. Her research addresses issues of national and cultural formation and gender concerns in Iran, as well as historical relations between the U.S., Iran, and the Islamic world. She is the author of highly influential works including Frontier Fictions: Shaping the Iranian Nation, 1804-1946, which analyzed land and border disputes between Iran and its neighboring countries. Conceiving Citizens: Women and the Politics of Motherhood in Iran, a wide-ranging study of the politics of health, reproduction and maternalism in Iran from the mid-19th century to the modern-day Islamic Republic, received the Book Prize from the Journal of Middle East Women’s Studies for outstanding scholarship in Middle East gender relations.

Kashani-Sabet is the recipient of an Institute for Advanced Study fellowship. For over a decade she has directed Penn’s Middle East Center as a Title VI National Resource Center and launched the modern Middle East studies major and minor undergraduate degree program. She has also served on the Faculty Senate and the Penn Arts & Sciences Dean’s Council on Diversity.

Suzanne is an Emmy nominated journalist and producer, a lecturer on Public Diplomacy at UCLA, and a senior non-resident fellow at the Atlantic Council focusing on Iran.

She has spent nearly a decade with the BBC covering foreign affairs, politics and breaking news from mass shootings to natural disasters. With postings based in Washington, London, Beirut, and Los Angeles, her reporting has taken her around the world to over 50 countries, from various conflict and disaster zones to inside the diplomatic and political world, on the planes of Secretary of State John Kerry and US presidential candidate Hillary Clinton.

Over the course of her career, she has landed multiple high-profile exclusive interviews including Iranian Foreign Minister Javad Zarif and Khaled Meshaal – Hamas leader in exile in Doha – during the Gaza War of 2014. Suzanne also played a leading role in securing the first sit down TV interview with President Obama post the Iran Nuclear Deal being agreed upon in 2015. Suzanne regularly moderates panels in Washington and New York, including on the side-lines of the UN General Assembly, at the request of the Italian Embassy, Truman Project, Middle East Institute, Hudson Institute, Women’s Foreign Policy Group and the Atlantic Council. She is also a strategic advisor to the Women's Public Leadership Network.

Ali Vaez is Crisis Group’s Iran Project Director and Senior Adviser to the President. He led Crisis Group’s efforts in helping to bridge the gaps between Iran and the P5+1 that led to the landmark 2015 nuclear deal. Previously, he served as a Senior Political Affairs Officer at the United Nations Department of Political and Peacebuilding Affairs and was the Iran Project Director at the Federation of American Scientists. He is an adjunct professor at Georgetown University’s Edmund A. Walsh School of Foreign Service and a Fellow at the Foreign Policy Institute of the Johns Hopkins School of Advanced International Studies.

Trained as a scientist, Vaez has more than a decade of experience in journalism. He has written widely on Iranian affairs and is a regular contributor to mainstream media outlets, including The New York Times, The Washington Post, The Guardian, The Atlantic, Foreign Policy and Foreign Affairs. He is a frequent guest on CNN, BBC, Al Jazeera and NPR. Vaez was a post-doctoral fellow at Harvard University from 2008 to 2010 and holds a Ph.D. from the University of Geneva and a master’s degree from the Johns Hopkins School of Advanced International Studies.

Shannon specializes in the history of U.S. foreign relations, with particular attention to the 20th century. Her research focuses on U.S. relations with the Islamic world, U.S. relations with Iran, Muslim women’s human rights, transnational history, and human rights and U.S. foreign policy. Her first book, U.S. Foreign Policy and Muslim Women’s Human Rights (University of Pennsylvania Press, 2018) explores the integration of American concerns for women’s human rights into U.S. policy towards the Islamic world since the Iranian Revolution. Her other publications include book chapters and journal articles on President Harry Truman and the Middle East, the international movement to end female genital mutilation (FGM), U.S. encounters with Saudi gender relations during the first Gulf War, U.S. relations with Iran, and state of the field essays. She has also authored essays for Passport and Town Square 49, as well as several book reviews.

Shannon is currently working on two new books. The first is a monograph on U.S. relations with Iran during the first half of the twentieth century, tentatively entitled The Ties That Bind: U.S.-Iran Relations, 1905-1953. The second book, American Feminism and the World since 1945: An International History