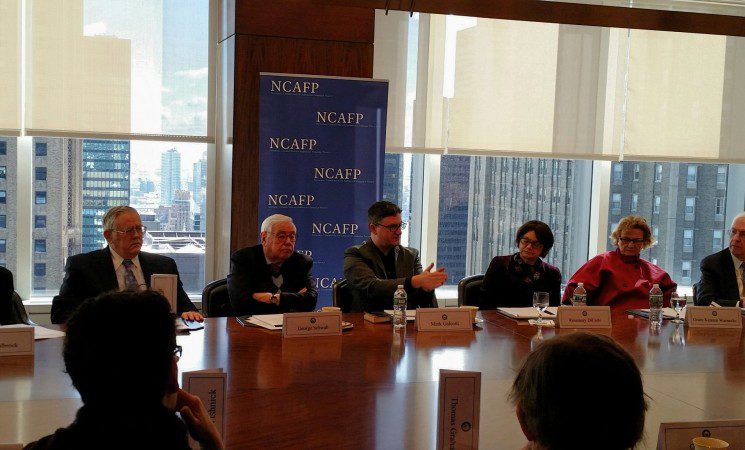 The National Committee on American Foreign Policy hosted Dr. Mark Galeotti on the morning of Friday, February 10 for a discussion of what the policy options are regarding Russian actions on numerous fronts from Syria, to Ukraine and the DNC hacks.  Particular focus was put on the notion of "hybrid war" and its new-found implications.  He addressed NCAFP Patron and Sponsor-level members and invited experts from various institutions and universities in the New York area.

Dr. Galeotti is a senior researcher at UMV, the Institute of International Relations Prague and an expert in Russian politics and security affairs. He studied history at Cambridge University and took his doctorate in politics at the London School of Economics. Dr. Galeotti still considers himself an historian, even if of the present day.

He was, at times, an adviser at the British Foreign Office, visiting fellow with the European Council on Foreign Relations, visiting professor at Rutgers-Newark, MGIMO (Moscow) and Charles University (Prague), head of the history department at Keele University and professor of global affairs at New York University. Widely published, with 16 books and hundreds of articles to his name, he also blogs at https://inmoscowsshadows.wordpress.com/. Some of his most recent work includes "Hybrid War or Gibridnaya Voina? Getting Russia's non-linear military challenge right" (Mayak, 2016) and his next, out on 23 February, is "The Modern Russian Army" (Osprey, 2017).
Dr. Galeotti's wide-ranging talk on Russia offered unique, personal insights from time spent in the region and working with other area experts.  Coupling well with the NCAFP's recent cyber policy roundtable and public event, Dr. Galeotti's perspective on Russia responded to a number of questions raised during those earlier events from a distinctly Muscovite perspective.
Previous article New Frontier in Defense Next article A Japan-U.S.-China Trilateral Dialogue