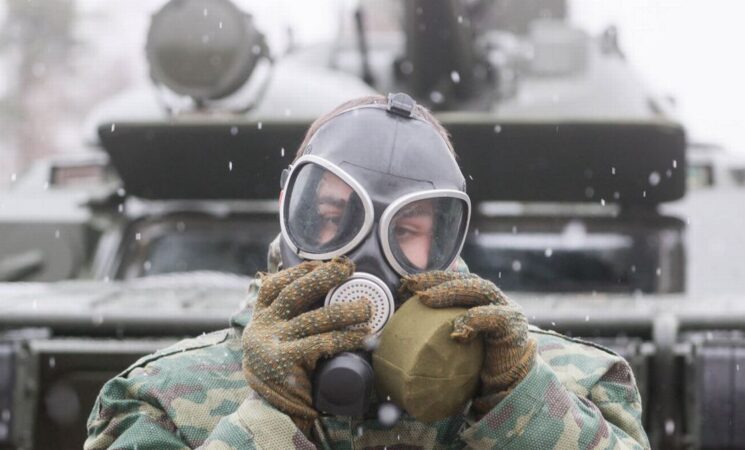 Biological, Chemical, and Nuclear Weapons:
Can the West deter Russia from using them?

On February 27 President Vladimir Putin ordered Russia's nuclear deterrent forces to be put on high alert, sending shockwaves through Europe and the international community. As the conflict has drawn on longer than anticipated, U.S. intelligence officials have warned of Putin’s “back against the wall” escalations. More recently, on March 11th, Russian propaganda outlets accused the U.S. of funding and harboring biological weapons facilities in Ukraine. Although these claims are false, the Kremlin’s misinformation campaign has signaled to Russia-watchers and intelligence officials that Putin is fabricating information and messaging to justify his own intention to authorize chemical, biological, or a possible small tactical nuclear weapon.

How can the U.S., Europe Union, and Allies brace for a possible Russian chemical or biological weapons attack in Ukraine? Are there lessons the U.S. has learned from the failure to respond to chemical weapons use in Syria in 2013?  How might Western countries prevent, mitigate, or respond to such an attack? How could NATO, the U.S., and Allies respond while trying to prevent further escalations?

To help answer these questions and many more, please join the Honorable Andy Weber, Senior Fellow at the Council on Strategic Risks’ and former Assistant Secretary of Defense for Nuclear, Chemical and Biological Defense Programs, and Mr. Ankit Panda, Stanton Senior Fellow in the Nuclear Policy Program at Carnegie Endowment for International Peace. The program will be moderated by Ambassador (ret.) Susan M. Elliott, President & CEO of the NCAFP.